The first version of Minecraft was released way back in 2009, but the game remains incredibly popular to this day. That should come as no surprise; not only is it enormous fun, but it’s a platform for kids and adults alike to create their own worlds. Some even use it for urban planning — and some teachers use it in the classroom.

Unfortunately, as with any successful project, cybercriminals are eager for a piece of the action. Since July of this year, we have detected more than 20 apps on Google Play claiming to be modpacks for Minecraft, when in fact their primary purpose is to display ads on smartphones and tablets in an extremely intrusive manner. We explain what these apps are and how to protect Android devices against such threats.

At the time of this writing, most of the unscrupulous apps we found on Google Play had already been removed. The five that remained were:

The humblest of them had more than 500 installations, and the most popular more than 1 million. Although the apps have different publishers, two of the fake modpacks carried almost the exact same description, down to the typos. 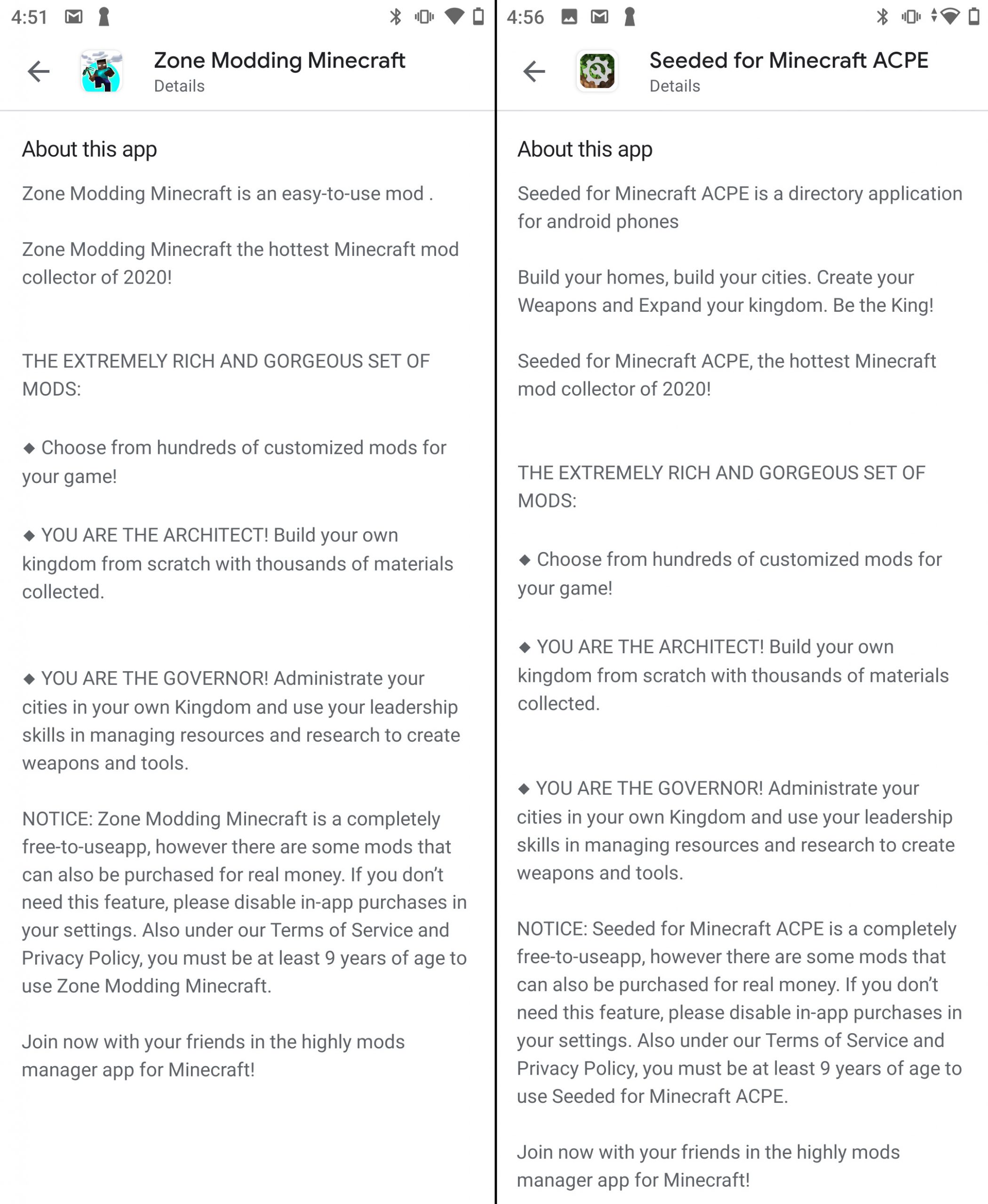 The app reviews are contradictory. Average ratings hover around the 3-star mark, but overall, scores are highly polarized, mostly 5s and 1s. That kind of spread suggests that bots are leaving rave reviews but real users are very unhappy. Unfortunately, in this case, the cybercriminals are targeting kids and teenagers, who may not pay attention to ratings and reviews before installing an app. 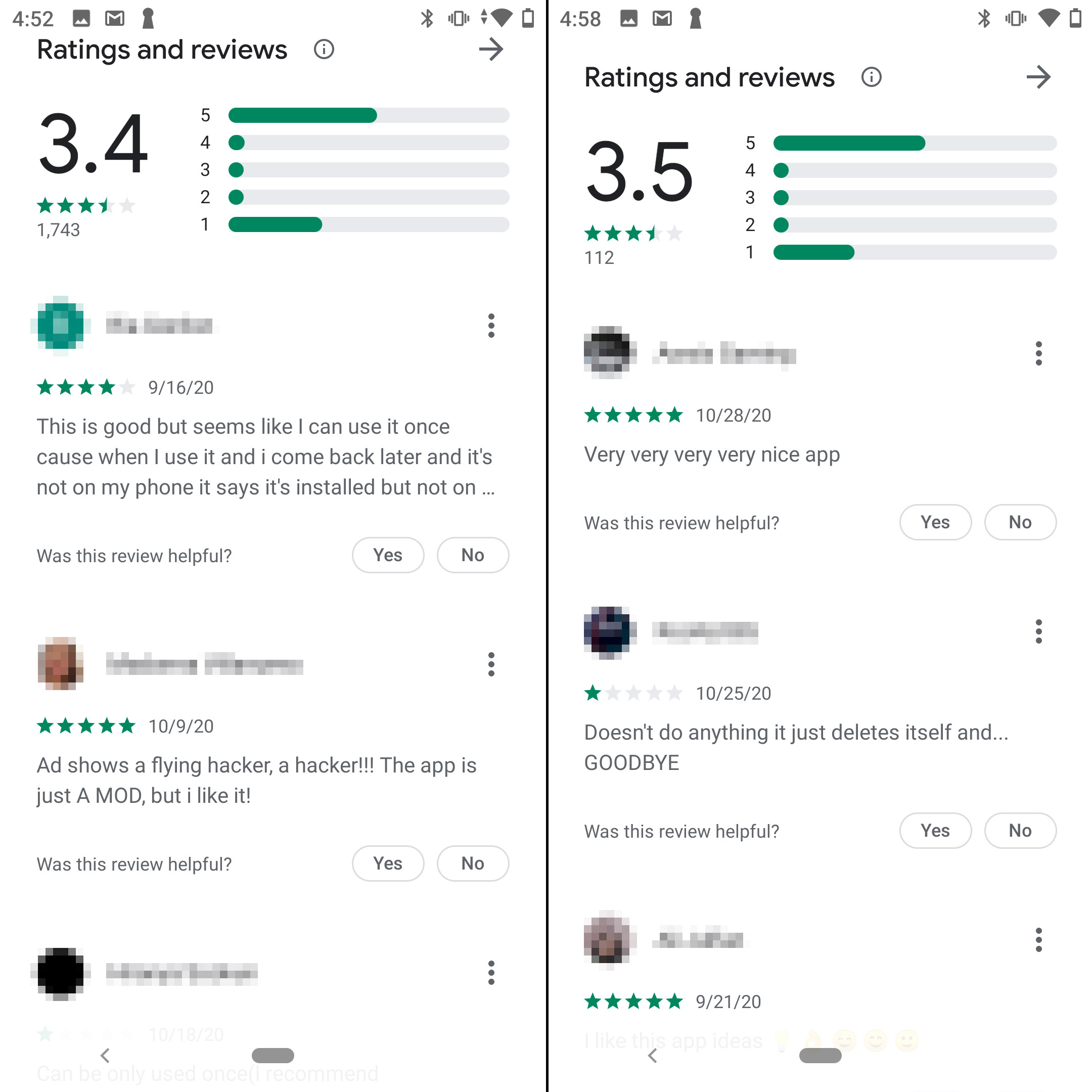 The apps receive either five stars or one. Suspicious!

We informed Google about the malicious apps mentioned above, and the apps were deleted from Google Play by the time this post was published. Nevertheless, it’s worth mentioning that:

Fake mods on the device

Meanwhile, users rightly curse the apps for not doing what they promised. Having landed on a smartphone, the “modpack” lets itself be opened once, but it doesn’t load any mods (in fact, the app we studied closely did nothing useful at all). The frustrated user closes the app, which promptly vanishes. More precisely, its icon disappears from the smartphone’s menu.

Because the “modpack” seemed glitchy from the start, most users, especially kids and teens, won’t waste time looking for it. They may even forget it and not bother trying to remove it. Unbeknownst to the user, however, the app remains on the smartphone — and not merely there, but hard at work.

Concealed from the user, the fake modpack starts displaying ads. The sample we examined automatically opened a browser window with ads every two minutes, greatly interfering with normal smartphone use.

In addition to the browser, the apps can open Google Play and Facebook or play YouTube videos, depending on the C&C server’s orders. Whatever the case, the constant stream of full-screen ads makes the phone practically unusable.

How to remove malicious Minecraft modpacks

Perhaps the most annoying thing about the fake Minecraft mods is that their victims have a very hard time figuring out why their browser (or Google Play, or Facebook, or YouTube) keeps opening. They are likely to conclude that the problem lies in the browser (or whichever app the fake modpack loads). However, uninstalling and reinstalling the browser will not fix the issue, and neither will tinkering with settings.

The only way to defeat the problem is to get rid of the malicious app. But that means locating it, which may be tricky; affected users may not remember what exactly they installed before their phones started acting up. After identifying the malicious app, you’ll need to find it in device settings (Settings → Apps and notifications → Show all apps) and delete it from there. Fortunately, the misbehaving modpacks get removed entirely with deletion and do not try to restore themselves.

If you’re having trouble figuring out which app is to blame for the smartphone’s odd behavior, or you just want to clean your child’s gadget quickly and easily, install a reliable security solution and scan the device. For example, Kaspersky Internet Security for Android recognizes fake Minecraft modpacks with the verdict not-a-virus:HEUR:AdWare.AndroidOS.HiddenAd.os, and prompts the user to delete any that are already on the smartphone or tablet.

For the future, to prevent your child from downloading malware, teach them about the potential dangers of apps, including ones on Google Play. In particular, focus on poorly written descriptions and wildly varying ratings and reviews — warning signs the developer or publisher might not be on the up-and-up. And just to repeat, be sure to install a mobile antivirus utility on their smartphone.

Steam and mirrors: How gamers get duped

How to respond to bullying in online games