Playing video games online is an excellent way for people to pass the time at home and online — something that has been valuable during the recent COVID-19 pandemic. Also, thanks to the pandemic, people are spending more time online than ever before. With that increased amount of time spent online has come an increased risk of cybersecurity threats. This is especially true for gaming — an arena often overlooked when it comes to cybersecurity. Because online gaming often happens as a solitary activity on a secure network, people think that gaming is safe. Recent research, however, has revealed that this may not be the case.

Despite what people may think about the safety in gaming, online gamers are also at high risk for viruses or cybersecurity breaches. A recent study showed that over 12 billion credential stuffing attacks have happened to online gamers in the past two years. Credential stuffing happens when a username or password for one account is discovered and then tried and used on other accounts. Credential stuffing can cause serious damage for the victim. Perpetrators can discover financial information, share personal information online, and steal the victim's identity.

People who are gaming online aren't only at risk of certificate stuffing attacks. They can also get viruses on their devices — either PCs or mobile — while they play. For that reason, it's safest to keep antivirus on while you're playing. However, some gamers, especially those who play MMO games or games with high-quality visuals, may be hesitant to have antivirus on while gaming. Some may even be afraid of even installing antivirus because they believe simply having it on a device could slow down the speed of a game.

As mentioned above, online gamers have experienced billions and billions of credential stuffing attacks over the past several years. And, while credential stuffing may be dangerous and destructive to gamers, these aren't the only threats gamers face. Here are some of the other risks that gamers might encounter while playing online.

Phishing happens when hackers attempt to gather people's usernames and passwords by simply asking for them. They can send fake notifications that a password needs to be updated or that they need login information for a purchase or security risk. Once someone gives the login information, the recipients can use it to log in to other accounts, such as banks and email. If you enjoy online gaming and want to ensure you avoid phishing scams, never hand over your login and password. Also, make sure your login credentials are different for every account. That way if you fall for a phishing scam, your other accounts won't be vulnerable to hackers — you'll only need to protect the account you handed over the info for.

For those who are serious about gaming, hackers may be motivated to hack into your gaming account to steal currency. This is especially true for mobile games, which have grown in popularity over the years and whose security is often much looser or lighter than the security of games that are played on PCs.

Sometimes, people with malicious intent can create trojanized games that are identical to a popular game and then insert those games into app stores. When gamers download or buy the games, they don't receive the game they think they're getting — they get the weaponized, trojanized version instead. These games will give the people who created it access to anything that's on your PC or devices so they can steal financial or confidential information. If you are gaming on a network that belongs to a business, the developers who created the trojanized game may even be able to access all the devices and information on the network, creating serious problems for a larger organization.

Even if you don't care that much about your game being hacked (or currency being stolen, etc.), you have bigger security concerns to care about if you are gaming with a device on the same network as other devices that you work on, store personal information on, or use for non-gaming purposes. This is especially true in the pandemic, when most people are working from home, and they are often connecting their work device or work network up to their home internet network — where they are also playing online games. While some malicious actors may only care about winning whatever game you're playing, many will use your game and accessing your network as a window of opportunity to get into the other devices on your network.

Once hackers have gotten into your network, they can now more easily access other information on other computers in your home — and if you're working from home, other networks you may be remotely connected to. If you want to avoid having any malicious actors connecting to, stealing information from, or bringing down your company's work network, make sure you are careful when gaming and that you take the proper security precautions to keep yourself protected.

How to Stay Safe While Gaming

As a consumer, there are several steps you should take to ensure that your devices and network are safe while you're gaming. Here are some of the most important:

Be careful and aware while you're gaming. Even if you're using online gaming as a way to unwind and have fun while you're not working, you still need to be watchful when it comes to security threats. If you get messages or emails asking for your login information, make sure to verify that it comes from a legitimate email address. By checking the source of the email, you can avoid falling for phishing scams. Also, if you're downloading new games, make sure that you check and make sure you're downloading a legitimate copy of the game. You can do this by seeing how many downloads, ratings, and reviews it has (depending on where you are purchasing or downloading the game). If a game that is supposedly popular only has a handful of reviews or none, you may be going for a trojanized copy. You want to verify that you're choosing a legitimate form of the game.

Home antivirus software is key for keeping yourself and your devices safe while you play games online. While antivirus software can't protect you from every online threat (like phishing scams), antivirus programs can catch threats quickly and detect and remove viruses before they do too much damage. When you run antivirus while gaming, you can ensure that if you download a virus or encounter a malicious actor while you're gaming, your entire network won't be infiltrated and all of your information won't be compromised in the course of a game. Instead, there's a good chance that antivirus will catch it quickly after and that you'll be able to remove the virus and repair much of the damage before it's too late. 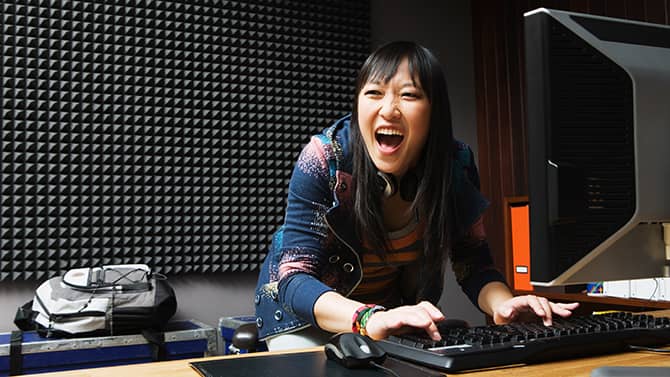 But will antivirus slow down my game?

We've emphasized above how many risks there are to encounter while gaming online. We've also explained how an antivirus program is essential for keeping you, your devices, your information, and your business’ information safe while you game. However, if you're a serious gamer, you may be wary of antivirus software. After all, graphics are everything in games — and running antivirus may obscure those graphics. Timing is also essential if you want to win live, multiplayer games, and you don't want to experience any delays in your games because of any antivirus. Luckily, however, many antivirus programs exist today that won't have any impact on the speed of your game. In fact, you won't even know that they're running while you game, so you can ensure that they're keeping you safe and allowing you to enjoy the best gaming experience while they do their job.

Many researchers have done the work to determine which security software is best to use while gaming. What they've found is that creators of antivirus programs today make their programs with computer function in mind. This means that antivirus should just run in the background and keep you safe without you noticing — or maybe even enhance the performance of your computer! Creators of antivirus today consider things like connection speed, RAM usage, framerates, and more to ensure that antivirus doesn't strain your computer. For this reason, you should have no fear that antivirus will affect your gaming experience because the programs have been designed to be invisible and helpful, no matter what you are doing online.

Many antivirus programs have a gaming mode

Antivirus programs clean up your computer while you're not gaming

One of the best parts about antivirus programs is that they know when you're not gaming or using your computer, and they can clean up your PC while you're not. This means that they don't interfere and slow down your gaming, and they leave your device in a state that ensures optimal speed while you play. With PC cleanup tools that are included in antivirus programs, you can get rid of any unnecessary junk that slows your computer down.

If you want to maximize antivirus gaming performance, the best choice you can make is to choose an antivirus program that has gaming mode. Many antivirus programs having gaming mode built-in, and these ensure that the program runs in a way that will never interfere with the speed of your game. When your computer security solution has a gaming mode feature that is enabled by default, you can be sure that the program runs in a way that won't interfere with your gaming — and you don't have to remember to turn gaming mode on and off when you're done playing. While in gaming mode, the antivirus program that has automatic gaming mode won't run scans and updates, so you won't have to worry about your games slowing down. Also, if any other application on your PC or device is opened in full screen, the antivirus program will not show any notification. This means that you won't have to worry about anything appearing on your screen and obscuring your view of your game, while also being sure you stay safe while you have a great time.

Despite the heightened risk of cybersecurity threats to gamers during the pandemic, there's no need to stop gaming in order to stay safe. One of the most important steps gamers can take to protect their information and devices while gaming is to install antivirus on their computer, tablet, and phone. Also, make sure that antivirus is running while you play. If you choose an antivirus program that has gaming mode, you won't have to think twice about antivirus gaming performance. You can enjoy all the benefits of using online gaming as a diversion and entertainment, without thinking twice about the safety of your devices and accounts.

If you are a passionate online gamer, or you spend a lot of time on your Internet-connected devices, consider getting security products from Kaspersky. Kaspersky can keep you safe from all major cybersecurity threats, including viruses, spyware, Trojans, and more. For serious online security, consider getting The Total Security Suite. This program offers you high-level protection for all transactions you make online—and it has gaming mode, so you can ensure all your information and devices stay safe, while you also have a flawless gaming experience. Learn more about the Kaspersky products that will keep you safe while you're online.

Computer viruses can bring a game to an abrupt halt

Online Gaming Scams during Pandemic. How to Stay Safe

Does having antivirus installed slow down games?

Kaspersky
There’s a common misconception that antivirus software impacts gaming performance. We’re here to explain why that’s not the case.

What are some of the laws regarding internet and data security?

How to hide your IP address

Everything to Know About Phone Number Spoofing

Mental wellness and digital devices: The impact of screen time on mental health